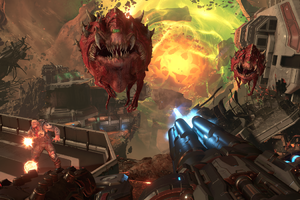 A pair of cacodemons engage the Doom Slayer.

The cacodemon returns as a monster in Doom Eternal, largely retaining its appearance from Doom (2016). It is slightly redder, its horns and teeth are grey as opposed to yellow, and now has a pupil in its eye, making its appearance closer to the classic games' incarnation. Its blood has changed to blue in colour, a detail taken from the original sprite.

More aggressive than the previous version, it is now capable of shooting a rapid sequence of projectiles consecutively, and its bite is accompanied by a lunging motion which extends the range of the attack significantly. This makes them quite a threat when they get close.

There are two ways to quickly deal with cacodemons. The first is to fire a grenade from the grenade launcher or a sticky bomb from the combat shotgun into the cacodemon's mouth when it opens. It will swallow the bomb with a cartoonish gulping noise, causing the cacodemon to suffer an internal explosion which dramatically inflates its stomach, in a fashion reminiscent of the Dodongo from The Legend of Zelda. When this happens, it will be instantly staggered, allowing for an easy glory kill.

The second method is to use the ballista with the arbalest mod against it. A fully charged bolt stuck onto a cacodemon will kill it instantly once the bolt explodes. Even without the mod, the ballista's bonus damage against flying monsters makes it an effective counter to the cacodemon.

Consistent with the prior game in the series, the cacodemon's awareness and cognition are stated to be limited to its hunger, and it is therefore likely to appear anywhere it can find food. Cacodemons are native to the Sloughlands, a part of the murky depths of Hell. Cycloptic titans which once lurked in the same areas of Hell in ancient times were speculated to be ancestors of the cacodemons by the erudite among the Night Sentinels.