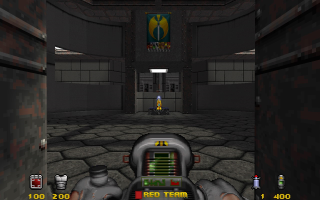 Players are immune to team damage, and altdeath rules are preferred as the default setting. The Veteran Edition game engine will begin a Capture the Chalice match automatically if a map is loaded with the required starts present while the game is in deathmatch mode.

Eight starts of both types are required for safety, as it is possible to assign anywhere from one to a full eight players to either team in any proportion through use of the Steam lobby feature in the game's frontend. It is also possible for players to allow the game itself to assign them teams, in which assignment begins with player 1 being randomly assigned to blue or red, and then alternating assignments for each subsequent player. If the number of players in the game is odd, the final player will be assigned to a team at random.

Unless a match is fairly balanced, the game engine disables any multiplayer-related achievements, so it is not possible to simply start a one-player netgame, or a game with everyone on a single team, and run the chalice multiple times.

Rebel allies summoned by the teleporter beacon inventory item have enhanced artificial intelligence in Strife: Veteran Edition, and in particular during Capture the Chalice matches. They will always appear with the team color, red or blue, instead of the summoning player's individual normal color. They will not attack any rebel or any player on the same team.

If a full scan of the map reveals that the chalice no longer exists, neither on the map nor in any player's inventory, it will be respawned by the flag base at a location 16 units forward in the direction its map thing was placed by the editor. This is both how the chalice initially spawns at level start and respawns after scoring a point, as well as a fail safe in case a dropped chalice is crushed by a moving sector or otherwise removed from the game.

Attempting to camp the return of the chalice to its base is ill-advised, as it will inflict telefrag damage to anything within its radius.

As of the v1.3 update, chalice carriers are no longer allowed to use Shadow Armor, to prevent camping with the flag while under the effects of near-total invisibility. A grunt will be heard if an attempt to use shadow armor is made while carrying either chalice, and additionally any shadow armor that was already active will be lost when a chalice is collected.

Three special maps are provided for Capture the Chalice play in SVE.wad. With default settings, the game proceeds to the next level in numeric order when one team scores five points, winning the match. It is also possible to set a match time limit, in which case a team will be declared the victor by having the most points. When MAP38 is exited, play will return to MAP36.