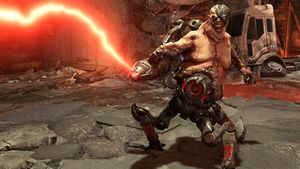 A carcass firing an arc of energy.

The carcass is a new cyborg monster introduced in Doom Eternal. It appears to be the upper torso of a zombified human fused with a robotic chassis with three insectile-like legs and a blaster fused into its right arm.

The carcass can fire ring-shaped lasers from the concave dish on its waist, create shockwaves along the ground with its arm blaster or create a wall-like force field to protect itself or other monsters at cost of mobility, which it can deploy a long way away from itself. The force field is heavily resistant to explosive, but like that of the zombieman, it is easily destroyed by the plasma rifle or a blood punch. The carcass appears to summon its energy shield most often in front of demons in the stagger state, to prevent the Doom Slayer from being able to easily glory kill them, or when the player is equipped with the rocket launcher or sticky bombs. In close quarters, the carcass uses a spinning strike that hits twice in a row.

Despite its defensive and offensive capabilities, the carcass is relatively fragile and can be brought down without much difficulty by sustained fire.

The carcass is a hideous product of UAC Cultist experiments, intended to extend the use of soldiers that were too badly injured to fight. Their cybernetics emulate living impulses within the decayed organic body of the host, suspending it in a state that can be called neither living nor dead; the only way to ensure that a carcass is truly destroyed is by completely separating its body from its cybernetic implants.

The carcass was first observed in footage released in March 2019 for the Google Stadia reveal.[1]