Casmania is a single-level PWAD for Doom II, designed by Vincent Lozupone and created January 1996, but uploaded to the /idgames archive in January 1997. It is a rather large level that takes the players across subterranean areas and a tower complex, similar to a city map. 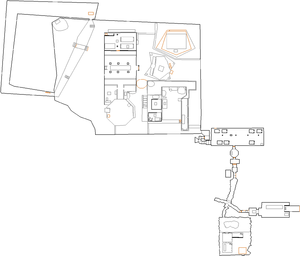 Map of Casmania
Letters in italics refer to marked spots on the map. Sector, thing, and linedef numbers in boldface are secrets which count toward the end-of-level tally.

The two secret sectors in this level are sectors that cannot be accessed. This is due to the entire level having no sidedefs or linedefs referencing the two sectors.

* The vertex count without the effect of node building is 1557.