Castle1 (or JAL_CAS1.WAD) is single-level PWAD for Doom, designed by James Legg and released in May 1994. The map is themed around a small dungeon. Despite the title of the WAD file, claiming this map to be set in a castle, it does not prominently feature characteristics found in an actual castle map. 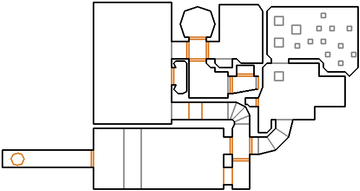 Map of Castle1
Letters in italics refer to marked spots on the map. Sector, thing, and linedef numbers in boldface are secrets which count toward the end-of-level tally.

* The vertex count without the effect of node building is 242.