Castle Nevermore is a single-level PWAD for Doom II, designed by Björn Ostmann (Vader) and released in June 2004. The map is themed on a gothic castle, with a detailed design that emphasizes layout and atmosphere. It combines small exterior areas, such as courtyards and gardens, with the deep and complex architecture of the castle. The map has a considerable number of enemies and low ammunition, which can present a challenge on higher skill levels. 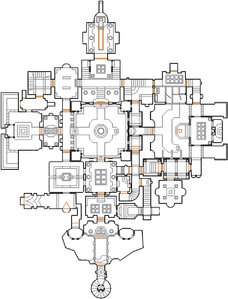 Map of Castle Nevermore
Letters in italics refer to marked spots on the map. Sector, thing, and linedef numbers in boldface are secrets which count toward the end-of-level tally.

Keep moving straight ahead until you enter the castle. Beware of the numerous enemies guarding the entrance. You will reach a room with several doors, including the blue door. Take the lower door on the east side, the one next to the blue door. Go down the stairs and follow the path straight ahead. You will see a door on the east side and also as the path continues north. Keep walking north until you reach the bottom, near a torch. Next to it is a switch which lowers an elevator and also a rocket launcher. Go up the elevator where the rocket launcher is and press a switch at the end. This will unlock future areas. Now, go down the other elevator and follow the path, take the door that goes to the west.

Now you will be in the red door area, where there are several enemies. In the upper area there is a soulsphere and several other items that can help you greatly. Once you take them, go down to the lower area, on the south path. You will now be in the central courtyard of the castle. Watch out for numerous revenants guarding from their watchtowers. Go up the steps to your right and then turn to your right, heading north. Enter the room, go through the spiral staircase and go up until you find a switch.

Once you press it, go back through the courtyard area and take the door to the west. Ahead is the blue key area. Turn around and go back and this time take the door going south. Continue until you find a switch and press it. In this area you will find a soulsphere, but if you pick it up you will be ambushed by two arch-viles, so be careful.

Now go back to the central courtyard and take the door to the south, in front of the fountain. Just turn to your left to find the blue door. Follow the straight path and you will easily find the red key. Once you have it, you can return to the red door area by simply following the straight path in front of you.

The red key opens the door to the throne room. A cyberdemon will attack you here. Once you kill it, go behind the throne and press the switch, which will take you down to the exit to finish the map.

The data was last verified in its entirety on April 2, 2022.

* The vertex count without the effect of node building is 3279.