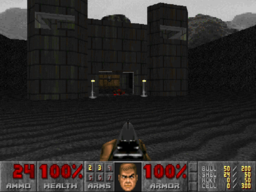 A Castle map is a style of thematic mapping centered around the creation of castle or fortress-like areas, presenting a mostly medieval outlook with tight progression and gothic aesthetics. It is a semi-realistic design that makes use of medieval-looking textures, such as marble or stone, and puts focus on the structural design of the level.

Due to the original visual style of the game, designing levels with castle-like structures has often been a natural progression for designers. This can also be attributed to the inspiration born from the game's origins in fantasy roots and tabletop role-playing games.

Early maps created in this style tended to follow a fairly common trend, usually copying dungeon map designs from games like Dungeons & Dragons. It was common for maps to be square or circular in design, with a large castle in the central area, surrounded by open areas. Nowadays, maps designed with castle aesthetics tend to have a greater complexity and design that combines different tropes.

Inferno and Thy Flesh Consumed have some of the earliest examples of castle-like environments.