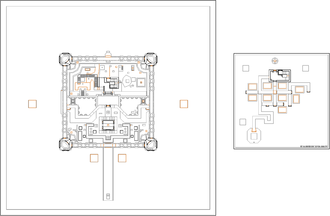 Map of Castle of Eternal Carrot in the Sky
Letters in italics refer to marked spots on the map. Sector, thing, and linedef numbers in boldface are secrets which count toward the end-of-level tally.

You are now in the southern part of the castle, with a large wood and steel structure in the middle surrounded by a fence. At this point, you are going to find yourself in a massive crossfire of imps, shotgun guys and cacodemons, with the occasional demon to boot. However, the biggest threat is the pain elemental at the back. Your first task is to cause some monster infighting to fell a shotgun guy, then grab his shotgun. Now you have some firepower to begin thinning the crowd. Head through the gap in the fence surrounding the central structure and go down either set of steps (watch for any stray demons on the way down). At the bottom, you will find a passageway with two shotgun guys, two boxes of shotgun shells and a super shotgun. Take the super shotgun to progress the level.

At this point, you probably should detour for a plasma gun (non-official secret 1). Head back into the marble building and notice that some bars to the north have raised. Carefully run out of this opening to land on a wooden platform with a plasma gun and four energy cells, which will be extremely useful.