Celestial Site is a single-level PWAD for Doom II using a limit removing source port. It was designed in 2015 by D.Scratch (a.k.a. DooMSkeR Scratch) and uses the music track "". It was created for the Doomjà-Vu contest in which it came in sixth and last, and was subsequently updated for its release to the /idgames archive. 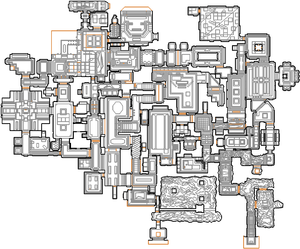 Map of Celestial Site
Letters in italics refer to marked spots on the map. Sector, thing, and linedef numbers in boldface are secrets which count toward the end-of-level tally.

An imp (Thing 1472) atop the south-east stairs has no flags set for any of the three difficulty classes, so it does not actually appear in the level. It is at the same spot as a harder monster on skills 3-5, so probably was intended to appear on skills 1-2. Also, two energy cells (1107 and 1108), a dead player (1096) and over a dozen other decorations have no skill flags either.

* The vertex count without the effect of node building is 14347.

As the map was created for the "Doomjà-Vu" contest organized by Daniel Gimmer (Tormentor667), it is therefore based on the layout of E1M7: Computer Station.