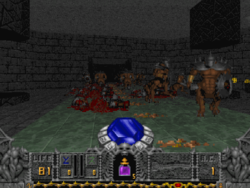 The player being ganged up on by a group of Centaurs.

Centaurs are enemies in Hexen. They are tan-skinned beings with humanoid torsos and hound-like bodies, outfitted with scant armor, large serrated swords and round shields with a skull motif. Centaurs possess 200 hit points each. According to the manual:

"Named after a mythical being, these monsters bear none of the pleasant traits attributed to them in legends: vicious, brutal and extremely hard to kill. Centaurs serve in the front ranks of many of the Serpent Riders' armies. They are capable of deflecting missiles with their shields, so use caution when attacking them."
― Hexen instruction manual

At melee range, the centaur will attack relentlessly with its sword until injured. After a centaur enters its pain state, it will raise its shield for a little while. In this defensive state, all projectiles except those with ripping capability are deflected, possibly back at the player, and the centaur is invulnerable to most attacks regardless of the direction the attack originates from. Mage and Cleric fléchette attacks can penetrate the shield to cause damage. The Cleric's poison clouds are particularly effective; while in the cloud centaurs take continual damage, usually keeping them stunlocked until the gas disperses or they die. Centaurs also receive increased damage from the Arc of Death although the lightning cannot pierce their shields.

Like ettins, centaurs will gib when killed by high-damaging attacks or any of the classes' fourth weapons.

In the IWADs the centaur is first encountered on these maps per skill level:

The IWADs contain the following numbers of centaurs per skill level: