Center is a single-level PWAD for Doom II. It was designed by Malcolm Sailor and released in 1997 as part of his Shrthard.zip along with Quick Is Good and Baron Gate. 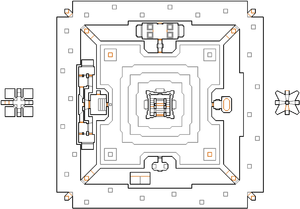 Map of Center
Letters in italics refer to marked spots on the map. Sector, thing, and linedef numbers in boldface are secrets which count toward the end-of-level tally.

This is a large and square map, with many enemies. You start at a crossroads where you can pick up a shotgun. Follow the straight path and a platform will come down with a Hell knight. Once you have eliminated the enemy, you can recover your health with a soulsphere and teleport to the next area.

The next area is a huge industrial complex resembling a waste site. The floor is full of sludge, but don't worry, you don't take damage. On the other hand, multiple enemies around the map will hear you and start looking for you to attack, including several cacodemons, revenants and lost souls. Just to the left side where you teleported, you will see a red teleporter, which moves you to the next area on a platform, let the platform go up and you will be able to follow a path where you will pick up a plasma rifle. This is the central area of the map, full of mancubi, imps and revenants. In the center of the map you will find a tech platform, but don't go out yet. First, eliminate all enemies located on the ledge before the center. As you go around the area, you will notice that on the north side there is a red door; on the east side a blue door; the south side is a stone wall and the west side is a door. Go there to proceed.

When you open the west door, you will be greeted by a storm of chaingunners. Go through the door and two paths will open up, side by side. No matter which one you take first, both paths lead to the same place and cross through a group of enemies. When you reach the end of one path, you will enter a small room, enter it and then go to the second one. When you enter the second one, you will see a different texture than the others right in front of you. It's a door, press it and a baron of Hell will be waiting in front of you, but you can kill him easily by exploding the barrels around him. In the position of the baron of Hell is a switch, press it and two small closets will open, one on each side of the area. The west side contains the super shotgun and the east side contains the red key, but be careful, they are guarded by two chaingunners and a revenant.

Once you have the red key, you can go back to the center of the map, in the ledges, and go to the red door. Behind the red door there will be a Hell knight, and behind it is another room with four pillars and former humans. A switch lies at the bottom, press it and it will lower the four pillars to reveal a revenant in each one. When you kill them, climb the pillars and a wall will come down in front of you. Each side reveals a small monster closet with chaingunners and various health bonuses. Go back the way you came in and go to the opposite side, where the stone wall was. This will reveal a small room with a chaingunner inside and the yellow key, as well as several useful items.

Chances are you won't have enough weapons and ammo to destroy the small army, so your best tactic is to run away. Look for the red teleporters; there is one in the upper left corner and one in the lower right corner. Crossing them will take you back to the top of the map. Quickly go to the blue door.

When you open the blue door, two chaingunners will attack you. Once you kill them, a false exit will be in front of you. By jumping on it, you will be teleported to a cramped room with multiple arch-viles. Luckily, there is invulnerability in front of you to resist the attack, but be careful not to get stuck. Your best option is to use the plasma rifle to quickly kill the arch-viles.

Once you survive the attack, you can go to the real final switch, press it and exit the map.