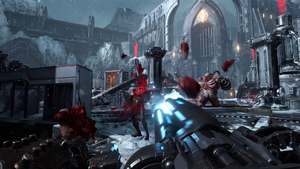 The chaingun in action.
This article is about the weapon in Doom Eternal. For other versions of this weapon, see:

The chaingun returns as a weapon in Doom Eternal, having been updated with a sleeker appearance similar to the pistol from its earlier incarnation. Similar to the previous game, it shares its ammunition with the heavy cannon.

The chaingun is found in the Super Gore Nest.

Unlike its previous incarnation, the chaingun no longer needs to spin up, allowing it to fire at full speed immediately upon use. While its range and accuracy are inferior to the heavy cannon, it compensates through the sheer firepower it can provide, especially against strong individual enemies and clusters of weaker enemies. Its new Energy Shield mod in particular is a valuable asset when fighting defensively, especially when enemies can only approach from one angle. 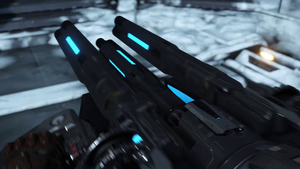 The chaingun's mobile turret being activated. 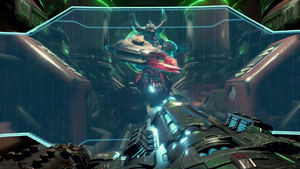 The chaingun's energy shield being activated.

Mobile Turret
The chaingun deploys additional barrels, dramatically increasing its damage and fire rate. While extremely powerful, it consumes ammo at an amazing rate, slows the user while active, and will make the chaingun overheat if fired for prolonged periods of time, disabling the chaingun entirely until it can cool down.
Energy Shield
The chaingun projects an energy shield, blocking all attacks while it is active. Although it can only be deployed for a short time before it deactivates, and while it may not look like it, can block attacks from all angles, though some attacks can still deal damage through it (for example the mancubus DOT ground attack). The shield nullifies melee attacks as well as projectiles, which can be the difference between life and death if overrun or if fighting in a chokepoint. The shield can be used as a melee weapon, especially in combination with the dash, and can do heavy damage even to the most powerful foes.

Fast Recovery
Shield recharge time reduced by 37.5%.
Dash Smash
While the shield is active, dashing into heavy demons will make them falter.
Mastery - Shield Launch
Dealing sufficient damage with the chaingun while Energy Shield is active will launch the shield forward as a projectile when its duration expires. Monsters hit by the launched shield will falter.
Mod is unlocked by dealing a total of 20,000 damage while the shield is active.

The M220 Chaingun is an 80-pound, six-barreled autocannon that fires 7.62x51mm AE rounds. It was originally conceived as a standard issue weapon for ARC mech-soldiers, whose exo-armor would be able to support a payload beyond that which normal infantry would be able to use. The custom-designed AE cartridge is built for the exclusive use of the M220's rail system, increasing the projectile velocity while avoiding overheating.