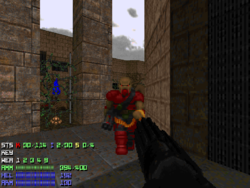 A friendly heavy weapon dude in the PWAD DSV3-War, by Samuel "Kaiser" Villarreal.
This article is about the monster in the classic Doom series. For other games, see: