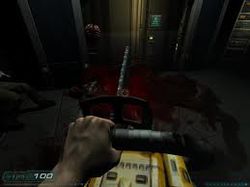 The chainsaw being carried by the player.
This article is about the weapon in Doom 3. For other versions of this weapon, see:

The chainsaw is an extremely powerful close-quarters combat weapon, based on the classic weapon. The chainsaws in the game were sent to the Mars Base by the Mixom Corporation by mistake; the original order was for jackhammers. Humorously and ironically, in PDAs, many coworkers discuss how useless chainsaws are on Mars; this and the story behind their delivery are perhaps in answer to the inconsistency (from the original Doom) of having a chainsaw in a place where there are no trees. It is the game's most powerful melee weapon first found in Service Room 2A of Communications Transfer. This same area also shows the zombies first making use of them against the player.

Being a melee weapon, the chainsaw does not require any ammunition to function, hence it is able to run indefinitely. However, it also takes a noticeable amount of time to rev up the chainsaw for usage, hence players may want to take this fact into consideration, particularly in close-quarters combat.

The weapon is not available in PC deathmatch. In Xbox deathmatch it replaces the plasma gun.

It is only found in the main campaign of Doom 3, and is not present in either of the two expansions, Resurrection of Evil and The Lost Mission.

The chainsaw can be used as a last ditch attempt to survive when out of ammunition or as a means to dispatch zombies due to the fact the weapon has effectively infinite ammunition like its classic counterpart. It is particularly effective against newly-spawned monsters like imps (as they require a short amount of time to activate), arch-viles (since they are vulnerable when summoning monsters), and wraiths whilst teleporting. In Nightmare difficulty skillful players may prefer it to the shotgun against commandos, as the time they take to recover from a lunge attack is just enough to kill them.

However, any enemies beyond that should be approached with caution. Usage on powerful enemies (such as mancubi or Hell knights) is not recommended as they will counter-attack the player, potentially causing heavy damage. Ironically, this is also the case with demons, who were singularly vulnerable to the chainsaw in the original Doom.