Chambers of Dis is a single-level PWAD created by Trey Azagthoth, the founder, guitarist, and lead songwriter for the American death metal band Morbid Angel. The level requires a ZDoom compatible source port.

The level can be downloaded off the Morbid Angel website. This version is a zip archive that contains an outdated version of ZDoom, an illegal copy of the Doom II IWAD, some skins and finally the map itself.

Azagthoth created his level piecemeal in-between writing and recording the 2003 Morbid Angel album Heretic. The level gets its name from a song title off Morbid Angel's 1998 album Formulas Fatal to the Flesh.

The level itself is quite large with many powerful monsters. It also includes various structures and effects, such as an area where the player walks in the sky and a faceless Icon of Sin that only contains a monster spawner, which unleashes spawn cubes in eight spawn spots around the map.

After being told that the level was considered too hard to be completed, Azagthoth went back and edited the map, removing many of the stronger monsters and adding more ammo and health items. 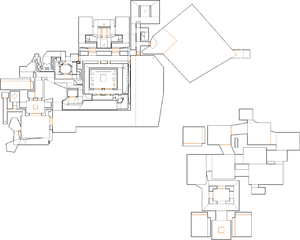 Map of Chambers of Dis
Letters in italics refer to marked spots on the map. Sector, thing, and linedef numbers in boldface are secrets which count toward the end-of-level tally.