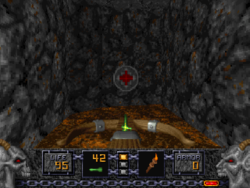 Darchala's Chaos Device is an artifact found in both Heretic and Hexen. When used, it sends the player back to the start of the level (or near a portal the player came from in Hexen). It is best used to get out of unpleasant situations. The figure featured on the artifact closely resembles the "Symbol of Chaos" designed by Michael Moorcock.

The Chaos Device remained a recurring element throughout the entire series, reappearing unchanged in Hexen II, while in Heretic II its appearance and behavior remained similar although there it was simply called a teleport spell, powered by blue mana.

In the Heretic IWADs the chaos device is first encountered on these maps per skill level:

The Heretic IWADs contain the following numbers of chaos devices per skill level:

In the Hexen IWADs the chaos device is first encountered on these maps per skill level:

The Hexen IWADs contain the following numbers of chaos devices per skill level: