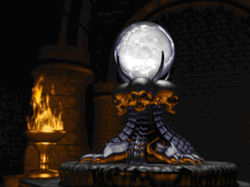 An artifact known as the Chaos Sphere has at times been used, mainly in Hexen and Hexen II, as a source of extra power for the Serpent Riders.

In Hexen, the Chaos Sphere is assumed to be a major source of power for Korax, although it appears to be kept in its own pocket dimension. In the ending sequence of the original campaign, the player is poised to take the Chaos Sphere after slaying Korax, and the text claims that it grants its wielder the power to "create worlds... or destroy them" along with a warning (foreshadowing Hexen II) that there still exist other beings more powerful than the player.

In the Deathkings of the Dark Citadel expansion, it is revealed that when the player takes the Sphere, he is whisked away to the Realm of the Dead, occupied by Korax's warriors. It is not mentioned whether this is the result of the Chaos Sphere's own power or some other curse laid by Korax. According to the Deathkings box, the Sphere is powerless in the Realm of the Dead. After defeating the Deathkings, the player returns to the world where the Chaos Sphere is kept, determined to claim it despite all endured hardships. It remains unclear what happens afterwards.

In Hexen, the Chaos Sphere is only a plot point with no presence in the gameplay; however, in Hexen II, the player will encounter it after defeating the smaller and weaker form of Eidolon, causing the eldest Serpent Rider to grow to massive proportions. It has 2000 hit points there, and must be destroyed; otherwise, Eidolon will remain invulnerable to any attacks. It is unknown if this is the same Chaos Sphere as in Hexen.

An artifact that may be related to the Chaos Sphere appears in the Hexen II mission pack Portal of Praevus - the Sphere of Order. Though it has a similar outer appearance as the Chaos Sphere, it does not display any specific powers and the connection between the two remains ambiguous.