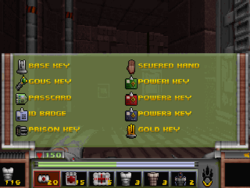 The popup widget for the keys inventory.

This page is about the keys found in Strife. Each key is only used once in the game, but may be used to open multiple doors.

The locked messages for the ID Badge and ID Card are switched: doors opened by the ID Badge give the message "You need an id card"; while doors opened by the ID Card give the message "You need an id badge". This is because the positions of the ID Card and ID Badge are switched in the key list enum compared to the global mobj table enum: the badge is the 137th mobj defined, which makes it the fourth key (the first, the base key, being 134th overall), and the card is the 11th key (144th mobj). But in the key enum, the card is in fourth position while the badge is in eleventh position.