Chasm Control is a single-level PWAD for Doom that came out in May 2015. It was designed by Christian Hansen, as a submission for a contest held by Buckshot on the forums of Doomworld. Another map was submitted by Doomkid, who became the winner of the contest. Its goal was to design a classic Doom map featuring outdoor areas in the style of a blend of E1M8: Phobos Anomaly, E3M6: Mt. Erebus and E3M8: Dis; the prize for the winner was a copy of D!ZONE Collectors Edition, formerly owned and signed by John Romero with a custom message which states: "Keep DOOMing! -John Romero."

As for the map itself, it is actually a revamped version of a 2000 map by Christian Hansen named The Unknown Chasm, and converted from Doom II to Doom. It requires a Boom-compatible source port, and it uses the music track "The Imp's Song". A further revamped version of this map was later released as E2M5: Chasm Control in the complete episode 2 replacement named Monument. 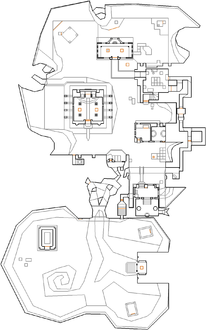 Map of Chasm Control
Letters in italics refer to marked spots on the map. Sector, thing, and linedef numbers in boldface are secrets which count toward the end-of-level tally.

* The vertex count without the effect of node building is 1749.