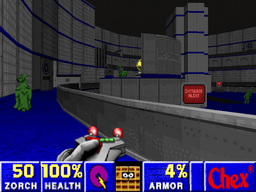 Chex Quest 3 is a 2008 computer game which runs on the ZDoom engine. It was developed by Charles Jacobi, who was the art director and lead artist for Digital Café and worked on the original Chex Quest. Charles credits Mark Quinn aka "Boingo the Clown" for giving him the motivation to work on Chex Quest again. The completion of this project by the original author, after failed fan-created attempts and a ten-year wait, was a huge surprise and Chex Quest 3 was well-received, earning one of the 2008 Cacowards.

Chex Quest 3 contains slightly updated versions of the maps from Chex Quest (episode 1) and Chex Quest 2 (episode 2), in addition to its new maps. However, it is not compatible with mods created for the original Chex Quest as it modifies several actors, including changes to their editor numbers.

New content include several textures and sprites, new monsters, as well as the five maps from Episode 3.

All maps are in the Hexen map format, and the WAD contains ZDoom-style lumps: DECORATE, MAPINFO, SNDINFO, ANIMDEFS, TEXTCOLO, LOCKDEFS, and LANGUAGE; therefore Chex Quest 3 can only be played on a ZDoom-compatible port.

Chex Quest 3 includes the enemies of both previous episodes, with some slight tweaks, as well as new ones. While the new enemies in Chex Quest 2 were mere cosmetic replacements for their equivalent in Chex Quest, and therefore had the same statistics and behavior, Chex Quest 3 separates them fully as different actor types.

Chex Quest 3 includes a separate executable, called CHEX3.EXE. This is a renamed build of ZDoom with a custom name and icon made by Aroenai, and contains, according to the Chex Quest 3 readme file, "appropriate changes to flemoids, projectiles, strings and more". The changes are however rather trivial in nature, with regular ZDoom officially supporting the game as an IWAD starting at version 2.3.0.

Despite being practically the same as regular ZDoom, the Chex Quest community created various projects requiring the official ZDoom based CHEX3.EXE:

The author of the Chex Quest 3 icon, Aroenai, made a semi-official replacement executable with the same CHEX3.EXE name. Unlike the official executable, Aroenai's version is actually more recent and is based off GZDoom. His version of CHEX3.EXE is based on GZDoom version 1.4.0 (r713M), corresponding with ZDoom 2.4.0 (r2096), dated January 5, 2010. It includes several enhancements over the official version: