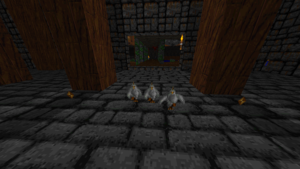 A group of chickens moving towards the player.

The chicken is a creature appearing in Heretic, but only if a player or monster has been transformed into one using a Morph Ovum. It is a small white chicken with a tendency to shed feathers and cluck in an agitated manner, giving away its position.

The chicken has few HP and a weak peck attack. Chickens can also enter small spaces; some deathmatch PWADs for Heretic were built with this in mind.

Players who have been morphed into a chicken may still use artifacts. A Tome of Power will instantly return the player to his normal form instead of its usual effect. It is possible for the chicken beak to be powered up, however, if an already morphed player is hit by another ovum.

The Hexen equivalent is a pig.