Chord 1 is a single-level PWAD for Doom II that came out in May 1997. It was designed by Malcolm Sailor as the first entry in his Chord series. 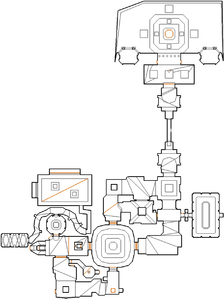 Map of Chord 1
Letters in italics refer to marked spots on the map. Sector, thing, and linedef numbers in boldface are secrets which count toward the end-of-level tally.

You start this map in a room with a berserker pack and two revenants. You will have to kill them Tyson style if you plan to survive. Then, go to the south side, cross the door and you will enter a long hallway where you will be ambushed by two chaingunners from behind, and a mancubus and Hell knight from in front. The path is linear so you shouldn't get lost. Keep going until you reach the bottom, where a switch will lower the ground level and you will enter a new area. Follow the path, but watch out for ambushes.

You will enter a new room where there are several switches, press them to open the path. This path will also reveal an elevator with several barons of Hell. For now, you don't need to take it. On the other hand, the switches will also open the door to an arch-vile, be careful that it revives all the enemies.

The new path continues north, going through what appears to be a sewer system. Follow it all the way to the bottom, left side first. You will find several pain elementals along the way, and, at the end, a Hell knight, which guards a rocket launcher. Now go to the opposite side, to the east. You will enter a large room, where the walls will open to reveal enemies as you go, until one of them reveals the red key. Now go back the way you came in and go to the barons of Hell room, go up the elevator and through the red door.

You will follow a long path with several enemies waiting for you, reach the bottom and you will see two paths. On the left side, on the south, there are several mancubus which will attack you from a distance. The right side is the right one, in the north, where a few barons of Hell will be waiting for you. Clear the area and move on, you will see a megasphere, which, when you pick it up, will make some barons of Hell teleport away from you and two archviles, one behind and one in front of you. Once you eliminate them, you can continue and you will reach a kind of library, where there will be hidden enemies waiting for you. There are three pillars, the middle one activates an elevator that will take you to the outside area, but you need the yellow key, which will be waiting for you on the way back. Go back to the way you came in and you will see a new room revealed, where several spectres will come out. Inside the room you will find the blue key, take it and go back to the beginning of the map.

Go through the blue door. You will face three revenants. Go to the bottom of the path and you will realize that this is the previous path, where the mancubi attacked you from a distance. There is a switch on the west side, which activates an elevator that will take you to a small area, where you will find multiple chaingunners and the yellow key. Once you have the yellow key, you can return to the outside area, where you needed it.

Now simply cross to the outside area and enter the small blue pool to finish the map.