Chord G is a single-level PWAD designed by Malcolm Sailor for Doom II. In the Top 100 WADs of All Time, it was chosen as one of the entries for 1999. Chord G was noted during its time due to its high level of tactical challenges and tight encounters. Instead of drowning the player in overwhelming numbers, the map opts for using strong enemies in small spaces, low HP items and constant use of traps. 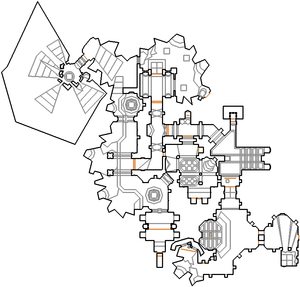 Map of Chord G
Letters in italics refer to marked spots on the map. Sector, thing, and linedef numbers in boldface are secrets which count toward the end-of-level tally.

This map stands out for being low in number of enemies, but much harder than expected. If you have ever played E4M1: Hell Beneath, this map has similar characteristics in terms of gameplay and style. You start the level in a small room with a revenant next to you. A super shotgun and a berserker pack is located on the south wall, on a platform activated by the switch on the wall. Once you arm yourself, the walls will reveal the rest of the area and several barons of Hell will attack you. Follow your path, advancing slowly and avoiding attracting the attention of multiple enemies at once. This map is especially populated by revenants.

Head west, to a wooden door which opens the way to a slightly more open area, reminiscent of a cavern of sorts. To the north you will find a mega armor that will be useful. Then head back south to the bottom of the path. There will be a small room with several useful items and a switch at the end. Collect the items first and several barons of Hell will attack you. Be careful to press the switch at the same time, because it opens a door that unlocks an archvile, which will make the combat much more complicated. This switch opens the door to the blue key.

Now go back to the area where you found the megaarmor in the first place. To your left is a small crevice that leads to the bottom of the cave. Go down there. This area has several pain elementals waiting for you. To the northwest is the switch that opens the blue bars just to the opposite side. This switch also opens the door to a room with a rocket launcher.

Once you have crossed the blue bars, you will enter another small cave section. Press a switch that will lower the walls to a teleporter. Multiple enemies will teleport at this point, including several revenants in the marble structure.

Return to the start of the map. This time, take the northern path and open the wooden door. Continue, pick up the chaingun and enter the icon-shaped teleporter on the ground. It will take you to a new area, where you must press a switch to open the door. On the other side open several enemies. It is preferable that you try to kill as many as possible before entering, because once you cross the platform, it will close again and you won't be able to open it. Go to the west side, go down the small crack and pick up the yellow key. Go back to the center and press the switch, which opens the door on the east side. Several enemies will attack.

At the end of this area, just to the north, there is a small yellow bar which, once opened, will allow you to enter the exit portal and finish the map.

* The vertex count without the effect of node building is 2262.