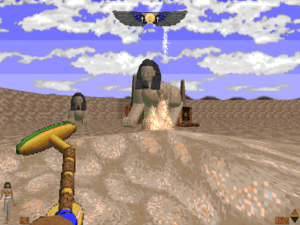 Chosen is a total conversion for Doom II created by Lil' White Mouse. Built for the ZDoom source port, it is themed after ancient Egyptian mythology and contains all new weapons, enemies and environmental objects.

In Chosen, players take control of a follower of Seth, named Kissa. She has been chosen by Seth to defeat Uraeusis, Apophis' abomination. Uraeusis has already charmed some Men and Gods in preparation for the destruction of the world. Kissa is dispatched into the underworld where she must fight through armies of soldiers from the gods and reach Uraeusis, and finally destroy him forever.

Chosen uses the ZDoom engine, utilizing many of its features. The first level is actually a difficulty selection level, reminiscent of Quake, although without the dangerous obstacles. There are five brand new weapons alongside many different enemy types, all leading up to the final boss confrontation with Uraeusis.

Chosen received one of the Cacowards in 2004.