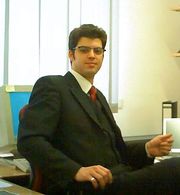 Christian B. Caldarone (The King Doom Experience) from Europe, was the project leader and chief developer of many software tools and utilities around the Doom engine source ports and PWAD custom levels.

The most notable developments were the MyDoom Frontend, also known as the KDX - The King Doom Experience Frontend and UMS - The Universal Master Server, a core component to drive an online platform of hosted games.

In Addition to that, Christian was the driving force for the development of the ZenNode Frontend, the KDX-to-GSA GameSpy Arcade Gateway, the WAD Factory - an advanced GUI to the SLIGE random level generator, DoomCQ - an ICQ-like infrastructure for Doom online gaming and the GSA Doom Mod, a special modification to GameSpy Arcade (GSA) to add unofficial native support for JDoom, Doom Legacy and PrBoom to GSA.

In 2003, the year when Christian decided to retire from the King Doom Experience project to head towards new challenges in the industry, the project released a custom level compilation on 3 CD to appreciate his era.

The compilation was containing a snap shot of all levels for Doom, Doom II, Heretic and Hexen present in the idgames archive at the time. This compilation was entirely managed by the KDX Frontend, giving the user a hassle-free experience with all levels stored in databases for easy selection and play. The release of the King Doom Experience CD set has established new standards for Doom Level Compilations in 2003.