Strafing is the act of moving laterally (i.e. to either side) without turning.

In the default keyboard configuration, the comma key strafes left and the period key strafes right. It is also possible to strafe by holding down the "strafe on" key (Alt by default) and pressing a turn key (left/right arrow).

When using mouse control, moving the mouse to the left or right normally turns the player. When the "strafe on" key is depressed, it results in strafing. The right mouse button is often assigned as "strafe on" to facilitate this.

Because of the way the Doom engine works, different combinations of the strafe on, directional strafe, and forward keys can cause the player to move faster than the normal running speed (see Straferunning). 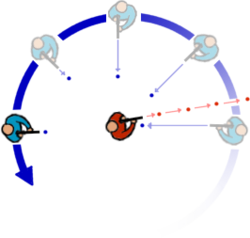 Circle-strafing around an opponent

Circle-strafing is a technique in which the player strafes around an opponent in a circular motion (hence the name) while continuously aiming at them. This keeps the player moving in and out of the opponent's field of view while allowing the player sustained fire on the opponent. It is particularly useful against opponents that hurl visible projectiles (such as a large group of imps, the cacodemon, the baron of Hell, and the cyberdemon).

Expert speedrunners may circle-strafe around groups of enemies during the reload time of the shotgun or SSG, to maximize the number of targets exposed to each shot.