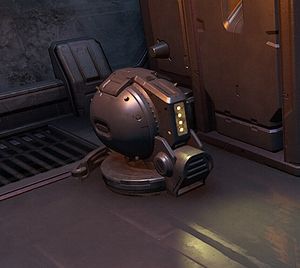 A cleaning robot turning toward the player.

Cleaning robots are small UAC- and ARC-made machines that wipe the floors in various levels in Doom (2016), Doom VFR, and Doom Eternal, especially facilities such as the Cultist Base and the ARC Complex. Most of these robots cannot be interacted with and are only part of the environment, usually found moving in square paths around the perimeter of rooms where no enemies are present. It is unknown who designed them, but they were likely originally made to wipe up the blood left behind after cultist rituals conducted by UAC personnel.

In Doom (2016) all of the cleaning robots are seemingly disabled. In Doom VFR, one still-active unit is used to retrieve a key in the BFG Division core area by Abraham Peters.