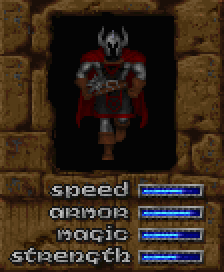 Parias the Cleric, as seen in the class selection screen in Hexen.

A stained-glass depiction of the Cleric.

Parias the Cleric is one of the three playable hero classes in Hexen. He appears as a well-armored man in chain mail with a horned helmet, cape, and leather gloves and boots. An ornate black tunic with red accents is worn around his waist. Parias has the most even balance of speed, armor, magic, and strength among the three classes, second in strength only to Baratus and in magic only to Daedolon. A stalwart soldier of the Church, but also skilled in the arcane, Parias is the most well-rounded class in the game.

The cleric is an effective class throughout much of the game, possessing both enough physical endurance to survive most attacks as well as a powerful magical arsenal for dealing with ranged combat. The primary drawback of the cleric is that his first tier weapon is fairly slow and overall less effective than that of the other two classes, meaning that players seeking to increase their damage output will find themselves very dependent on mana.

In order to avoid being simply the "middle" character, the cleric has a few unique abilities, such as unleashing poison gas clouds or draining life from his enemies.