Cold as Hell is a total conversion for Doom II set in a fictional military research facility in Greenland in the 1950's. The project was created by Jonaya Riley, and was originally released in November of 2004 for the ZDoom source port. The gameplay of the conversion mixes the classic Doom style of gameplay with elements of both survival horror games and military shooters: numerous changes to Doom's core gameplay are implemented, including the introduction of a reloading weapons system, mission objectives, a open-ended hub structure for levels, and the inclusion of snow effects. The custom soundtrack was made by Jonaya Riley and Ben Wachal.

In 2008, Riley released an update dubbed Cold as Hell: Special Edition, meant to address several bugs and problems with the original release, streamline the gameplay and update many of the effects to make use of GZDoom features.

Cold as Hell: Special Edition was one of the recipients of the Cacowards in 2008. 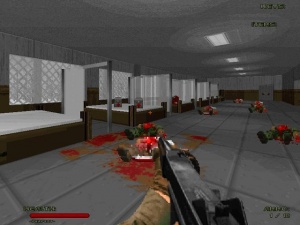 Medical Facilities in Cold as Hell.

Development of Cold as Hell began in earnest in early 2004 and continued through the year. The conversion was developed using ZDoom 2.0.63a as a basis, and made extensive use of the source port's advanced features to create the various gameplay enhancements and special effects for the conversion. The map was planned out as a large hub that began with a single level detached from the main hub and quickly opened up into a much larger complex. For the most part, the player is free to travel throughout the research complex in which the conversion is set.

Generally, Cold as Hell was well received by the Doom community. It maintains a 4/5 rating on Doomworld's idgames index, and has received largely positive comments on its plot, setting and gameplay. Common player complaints include excessive difficulty (especially at the highest difficulty settings) and the overly harsh impact of the bleeding system and reduced health on the player.

Most of the major complaints relate, however, to issues of the conversion's performance and various game-breaking bugs.

The 2008 special edition was better received, without the negative comments about game-breaking bugs. The initial release contained some minor bugs and inconsistencies, which were subsequently fixed. Additionally, minor changes were made to gameplay in response to comments. Perhaps the most significant gameplay adjustment was the addition of the new "combat styles" which, when selected at the beginning of a new game, would alter elements of the game such as the weapon reloading or bleeding system. This system was introduced to try to accommodate players that wanted the gameplay mechanics to be slightly more forgiving to players used to the original Doom mechanics. The 2008 edition currently has a 4/5 star rating on Doomworld's idgames index.

In December 2008, Cold as Hell: Special Edition was awarded a Cacoward in Doomworld's annual celebration of Doom's release.

Cold as Hell, on release, had a number of issues with its performance that would render it nearly unplayable on older computers. Primarily due to the snow effects and possibly to the large size of the levels in the hub, the game would begin to lag heavily on many computers. Snow effects could be switched off, although this toggle was broken in the initial release of the game. Two patches were released to combat the problem of lag, although they were only partially successful in improving performance.

On versions of ZDoom other than 2.0.63a (which the conversion was developed on), a number of crippling bugs rendered the game largely unplayable. Most importantly, the weapon reloading code was largely broken, preventing players from using their weapons at all after trying to reload them once. Additionally, players reported other problems that would prevent the player from advancing in the game. These problems, combined with existing performance issues, rendered the conversion largely unplayable to many in the potential audience.

These problems were compounded by the abrupt disappearance of the author from the online Doom community. After releasing Cold as Hell and providing basic support through two patches, Riley ceased to try to support the conversion and made no further attempts to fix the remaining issues. A few users, including Christoph Oelckers (Graf Zahl), tried to modify the conversion to render it playable under newer versions of ZDoom, but due to the failure of the original author to include ACS source, they were unable to completely replicate the original behavior of the conversion and fix the various issues it had. 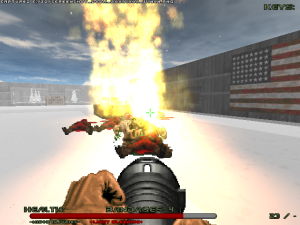 In 2008, Riley posted on the ZDoom.org forums to express her intent to fix many problematic aspects of the conversion. In November of 2008, Cold as Hell: Special Edition was released. The new version of the mod made a number of changes to the original version.

Visual effects were upgraded to take advantage of new features in GZDoom. The snow, which had caused numerous problems in the original release, was replaced with the author's weatherFX2 weather system, which used a much more streamlined and user-friendly approach to creating the snow effects than in the previous version. The weapons code was completely re-done, and many improvements were added to gameplay elements.

In addition to the bug-fixes and gameplay enhancements, the storyline was re-written slightly, and new voice acting was recorded by several members of the ZDoom community to fill in details of the plot that were previously unexplained.