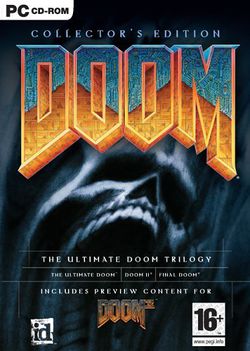 Box cover of the collector's edition.
This article is about the 2001 classic Doom release. For the Doom (2016) release, see Doom Collector's Edition (2016).

The games come with the Doom95 executable. The original DOS executables are not included in the game pack.

The package was re-released on January 29, 2003, and includes a trailer, screenshots, and other information regarding Doom 3 (which was not released until August 3, 2004).