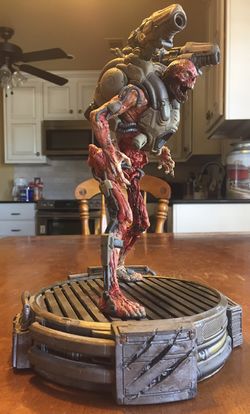 The Collector's Edition revenant statue is a 12" PVC statue created by Project TriForce using the original 3D sculpt of the revenant from Doom (2016) as a basis.[1] It is an officially licensed item commissioned by Bethesda initially for inclusion in the game's collector's edition, though it was also offered separately through the Bethesda Store for around two years after the game's release, having been discontinued after the announcement of Doom Eternal. As such, it is not a typical limited edition item and is available in relatively large numbers.

The revenant stands on a base made to resemble a turbine similar to those found near the end of the Foundry level. The base contains a slow-spinning mechanical fan and three red LED lights which are powered by two AAA batteries which install into the underside of the base. A switch to toggle these features on and off is found near the back of the base and is covered by a small removable plastic detail panel.