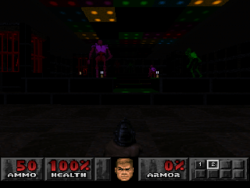 Colored lighting is a feature in which the ambient light of given sectors can have a tint. The port of Doom to the Sony PlayStation made heavy use of such a feature to compensate for the simplification of level geometry. Doom 64 has a particularly sophisticated colored lighting system, where each sector can have up to five different colored lights, each affecting one particular type of element in the sector (actor sprites, floor, ceiling, wall, etc.).

A simpler implementation of colored lighting is used in Boom through the use of custom colormaps. However, instead of affecting only the content of the sector, it affects the entire level as long as the camera is within the colored sector.

SMMU and Doom Legacy instead apply the effect only to the sectors with custom colormap assigned regardless of camera position, allowing for true colored lighting. This deviates from Boom behavior, but the colormap effect is almost always used for deep liquids effect, where opaque liquid surface blocks view of sectors with different colormap assigned. 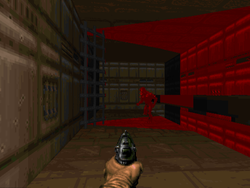 With a tweaked COLORMAP, it's possible to have coloured lighting in vanilla Doom. However the effect is difficult to manage and has not been used in many PWADs. Later versions of the Inkworks tool came with mixmaps which could be used to compose a mixed-tint COLORMAP. The more modern tool InkFoundry can also be used.