Comatose is a single-level PWAD for Doom II and the PrBoom+ source port that came out in January 2016. It was designed by Lainos, uses the music track "Android Hell" from Portal, and was the recipient of one of the 2016 Cacowards. 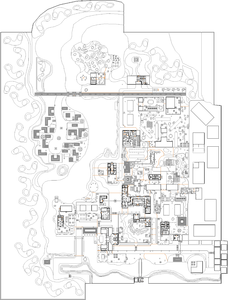 Map of Comatose
Letters in italics refer to marked spots on the map. Sector, thing, and linedef numbers in boldface are secrets which count toward the end-of-level tally.

The blue key is located at the far northwest part of the map, at the edge of the railroad. The red key is at the south end of the map, past a bridge and inside a building. Both keys are open for the taking right away with no other obstacles besides monsters to deal with. The yellow key is optional, and requires the blue key to reach. The exit requires both keys, and is at the east end of the map in some ruins.

* The vertex count without the effect of node building is 58957.