The commando from Doom 3 looks vastly different from its Classic Doom counterpart, wearing no shirt or armor, but wearing a futuristic helmet of a style reminiscent of German Stahlhelme and a pair of camouflage army pants. They have a slightly different origin than other zombies, having been human marines transformed into brutal super warriors by the demonically possessed Dr. Betruger. They still maintain fragments of their human language as they can be heard growling the words "You!" and "Die!". Betruger uses commandos as his personal guards, and he is seen being escorted by two of them at the start of Delta Labs Level 3. He afterwards commands them to destroy the bridge to Level 4 with explosives.

There are two types of commando in Doom 3, one of which carries no firearm, but has a tentacle for a right arm. The other one has both its human arms intact and carries a chaingun. They are both extremely dangerous foes due to their high offensive capabilities, and are among the most elite of Doom 3's monsters, posing a similar threat level as the revenant, and exceeded only by the likes of the arch-vile, mancubus, and Hell knight. 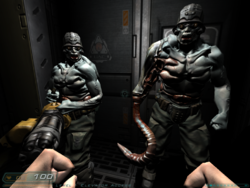 The rough comparison of the sizes of both types of commandos.

In general, both types of commandos are considerably tougher than their classic counterparts, with the chaingun commando being capable of surviving a direct rocket hit. Interestingly, the tentacle commando stands a full head taller than a normal human, while the chaingun commando is the same size as a human marine or Z-Sec soldier.

Commandos typically appear individually or in small groups of two or three, although they often appear alongside other enemies such as Z-Sec soldiers or imps.

This monster charges straight at the player, moving faster than player's sprint speed. Whenever he gets within range, he will lash out with his tentacle arm, using it as a sort of whip. Occasionally, he will perform a short range leap attack with his knee which is nearly impossible to dodge. When he gets close enough not to rely solely on his tentacle "whip", he will attack the player with a rapid series of punches and kicks. Nothing except a killing hit can stop his charge or interrupt it. Unlike other monsters, tentacle commandos can leap down from overhead balconies or platforms to attack the player. As mentioned before, they display a level of intelligence far greater than most of the other demonic creatures. The most significant example occurs with one of the first few encountered in the Delta Labs, which will run for an alarm button instead of attacking the player; if he reaches it, he will set it off and a large number of monsters will then come to his aid.

Arguably the single most dangerous of the game's mid-level demons, he will only stop shooting if hurt significantly (when this occurs, he will make an "ow" sound, and run for cover) or killed. He carries a chaingun, which he fires in a single prolonged burst, and chases after the player when he is not firing. Occasionally he uses cover like the Z-Secs. Unlike Z-Secs, however, the commando does not lean around cover, and instead sidesteps in and out to fire at the player. He will also lay down extensive suppressing fire if the player is attempting to hide, and will almost never stop firing in some cases, necessitating the use of grenades to flush him out. Unlike his tentacled colleague, he has no melee attack. He will however fearlessly fire his chaingun even at point-blank range.

This enemy is nearly impossible to shake off, so the best tactic is to use brute force. Using either the chaingun or the plasma gun against him is the most effective technique. Ducking whenever he attempts to hit the player with his tentacle is the only viable means for dodging his basic tentacle attack as the tentacle extends almost instantly. If you are crouched, he can kick you, but he is generally quite a bit slower to do so than to use his tentacle.

If he performs a leap attack, the only thing players can do is to keep firing and attempt to move sideways and backwards, hoping either to kill him before his attack strikes home or to successfully dodge the attack, the latter being a rare occurrence. Players should try to avoid getting within melee range with him as his melee punches and kicks are vicious and very difficult to dodge.

If surprised, one point-blank shotgun blast to the head will kill him instantly. Using this method, if the player can see him charging from a great enough distance, it is usually easy enough to sprint towards him with the shotgun and head-shot from point-blank for a one-shot kill. A point-blank shotgun blast to the chest will also kill him if all 13 pellets hit, but this leaves the player open to his melee attacks if the gambit fails. In Resurrection of Evil and The Lost Mission, the double barrel shotgun is the optimal choice, since it kills them with ease. A grenade can also easily get the job done - just make sure he is not too close to you after you toss the explosive at him.

If you do not want to waste ammunition on the tentacle commando, it is also relatively easy to kill him with the chainsaw. If the commando leaps at you, duck, and keep the saw revving. If your aim is good, you can kill him before he starts to kick you.

If ever there was a good reason to use the rocket launcher, this is it. Keep in mind that chaingun commandos are tough enough to take two rockets to bring them down, unless they are hit in the face. Players should aim at the ground in front of the commando, and always keep a wall between them and the commando when not attacking. Grenades are similarly effective if "charged" to create a longer throw distance. Alternately, players can use either the chaingun or plasma gun against him, popping in and out of cover or circle-strafing while firing repeatedly, as the chaingunner's spin-up delay in firing will throw off his aim just long enough to allow the player to be a step ahead of the spray.

Fighting chaingun commandos at long range is preferable, as their accuracy is somewhat reduced at a distance. Close range combat is never advised, though if the monster begins to give chase, it may become necessary. Finding cover remains a better option.

Commandos of both types are a common enemy in later levels. In Resurrection of Evil, however, they appear on only one level.

* Some of the tentacle commandos in these levels are spawned by the arch-viles, thus their amount can vary. Here only number of distinct spawn points is shown.

Commandos are encountered when the player is near Dr. Richard Meyers and when fighting through Exis Labs after being instructed to find a plasma inducer.