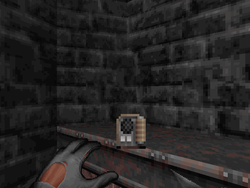 The communicator pickup from Strife, used in the demo version of the map, seen here in MAP33: Town.

The communicator, usually referred to in-game as the com unit, is an item that appears in the demo and retail versions of Strife. It allows the player to receive messages from BlackBird.

In the retail version, the communicator is obtained from Rowan after completing his quest to assassinate Beldin. In the demo version, it is instead found in Harris's stash inside the tavern if the player correctly deduces the man's treachery and kills him instead of accepting his promise of "gold and glory" by taking the key to Governor Mourel's office.

The item gives the player a power-up status, similar to shadow armor or an environmental suit. This permanent power-up status is checked for by linedefs with actions which start voice sound effects.

In the IWAD the communicator is first encountered on these maps per skill level:

The IWAD contains the following numbers of communicators per skill level: