The Compet-n[1] database is the oldest website collecting speedruns for the Doom games, as well as a select few add-on levels (Hell Revealed, Requiem, Memento Mori, Memento Mori II, The Classic Episode, Alien Vendetta and Scythe); its demos and players are generally considered to be among the best in the world.

Compet-n was founded by British Doom player Simon Widlake, probably in November 1994 (one month after the release of Doom II); the first demos were contributed by Sven Huth (Dasa) on 18 November 1994. It was originally hosted on an FTP server at a British university, but soon moved to cdrom.com. Many of the early Doom "gods" started participating during this time, submitting a large number of demos and filling the world-record tables.

In March 1997, when Widlake could not spare the time to maintain the site anymore, a temporary alternate FTP archive was started at the Budapest University of Technology and Economics by Istvan Pataki; it quickly became the main Compet-n site, and responsibility for it was handed over to Adam Hegyi in early 1998, when Pataki lost interest. Hegyi continued to maintain the site until July 2005.

Many of the veteran players retired in mid- to late 1997, but a wave of new players emerged in 1997-1998, obsoleting many of the older records; 1998 also saw the first ever Doom II Nightmare! run, done by Thomas Pilger (Panter), and the inclusion of pacifist and Tyson styles.

The Compet-n FTP site had to move again twice in 1999; nevertheless, 1999 turned out to be the second most popular Compet-n year after 1996, with many new tricks being discovered including rocket jumps, arch-vile jumps, glides, slides and more. All Doom episodes had Nightmare! runs by this time, and NM100S was introduced as a category in 1999. In 2000, Compet-n also started accepting cooperative demos. 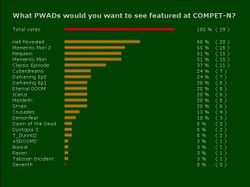 In March 2001, an online poll was conducted to decide which PWADs would be accepted for demo submissions at Compet-n.

Compet-n remained on a hiatus after Hegyi's departure in 2005, although some demos were uploaded after July 2005 into /incoming directory, until 2008 when the Compet-n FTP became nonfunctional. In 2010 the demo files archive also stopped working, followed by temporary downtime for the main page from 2011 until March 2012. Most of the Doom speedrunning done after Compet-n became inactive has since then been archived at the Doomed Speed Demos Archive.

In May 2012, Laura Herrmann (BahdKo) gave a copy of Compet-n site source to Zvonimir Bužanić (fx) with agreement to strictly follow Compet-n rules. The site was then moved and relaunched at https://www.doom.com.hr/compet-n/, with additional database development by Jarmo Ranta.[2] The original, idle Compet-n site is archived at http://www.doom2.net/compet-n/ (archived 🗺).

Subsequently the demo database was divided into two parts, traditional Compet-n requiring strict vanilla play, and a new Competition Doom with rule changes to simplify recording on modern computers, discourage cheating, and expand the set of megawads used. To support the latter project, fx and others forked Chocolate Doom into a dedicated limit removing port, CnDoom. [3] [4] [5] [6]