Congestion Control is a single-level PWAD for Doom II. It was designed by Karthik Abhiram and uses the music track "Popcorn Dance Mix" by Davie M. Karlsson, as well as title music track "Role Model" by Eminem and intermission music track "MMMenu" from Rise of the Triad by Lee Jackson. It was chosen as one of the entries for 2002 in the Top 100 WADs of All Time. 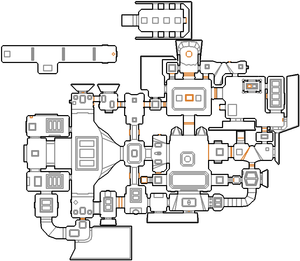 Map of Congestion Control
Letters in italics refer to marked spots on the map. Sector, thing, and linedef numbers in boldface are secrets which count toward the end-of-level tally.

* The vertex count without the effect of node building is 2243.