This article is about a mod. For the original Containment Area, see E2M2: Containment Area (Doom).
This level occupies the map slot MAP12. For other maps which occupy this slot, see Category:MAP12.

Containment Area is a single-level mod created by J.C. Bengtson (SailorScout) for Boom-compatible source ports. As the name implies, it is a homage to the episode 2 map, though it is a Doom II mod. 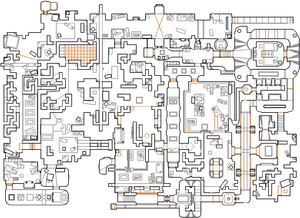 * The vertex count without the effect of node building is 4771.