"Marine? You hear me? Back off from that console. Do not call for reinforcements. We don't know what the hell is going on here, and until we do, this area remains under UAC control. Cancel that transmission!"
― Elliot Swann [source]

Counselor Elliot Swann is a main character in Doom 3. He was a powerful lawyer, sent by the Board of Directors of the UAC to investigate strange occurrences on the Mars Base, in particular the experiments of Dr. Betruger with teleportation devices. He is always followed by Jack Campbell, his bodyguard. During the invasion, he is initially depicted as something of an antagonist, as he attempts to stop the Player from calling for military reinforcements, purportedly so that the UAC can remain in control of Mars. However, as the game progresses, it is revealed that he is actually trying to save Earth from invasion, even at the expense of his own life. He is also revealed to have been in contact with Elizabeth McNeil, the scientist who first warned the UAC about Betruger's experiments.

Swann also appears in the Doom 3 novels, which roughly follow the plot of the game. Unlike in the game, he is depicted as being somewhat cowardly, and at one point, Campbell has to force him to accompany him to Delta Labs. 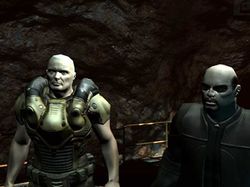 His first appearance is the cutscene shown near the beginning of the game, in which he disembarks (with his bodyguard, Jack Campbell) from the same dropship that has taken the player to Mars. Shortly after, his character is expanded upon in another cutscene in which the player overhears a conversation held between him and Doctor Malcolm Betruger. Swann wants to know why so many workers are complaining and requesting transfers off Mars. He also wants access to the entire Mars facility - including the top-secret Delta Labs. Betruger shows no regard for Swann's authority, and cryptically remarks that "amazing things will happen here soon."

After the demonic invasion, Swann is seen in the Administration complex arguing with Betruger over the videocom in another cut scene. Swann tells Betruger that the situation is out of control and the UAC is taking over here. When Betruger refuses to hand control of the facility over to Swann, Swann and Campbell decide to take matters into their own hands.

In following appearances, Swann's primary objectives are to stop the transmission of the message that would alert the military reinforcements in Earth orbit, and consequently would allow the demons to hijack their spaceships and invade Earth. He and Campbell destroy the main communications equipment with Campbell's BFG 9000. He then contacts the Doomguy and tells him not to send the transmission via the satellite system.

After either the player or Betruger sends the transmission to the fleet, Swann decides to head for Delta Labs and stop Betruger himself. Unfortunately, at some point in Delta Labs he is ambushed by a demonized Sergeant Kelly - now the monstrous Sabaoth - and is greatly wounded. Campbell leaves him behind (probably on Swann's orders) and goes after Kelly.

Counselor Swann is primarily seen in cutscenes as well as two notable points in the game: one when he communicates directly with the player via a videocom in the satellite room, and then finally face to face when he gives the player his PDA so that he can access a restricted part of the base. At this point, he is gravely injured and speaks with great difficulty. He informs the player that Sergeant Kelly is no longer human and that the Hell Hole in the caverns must be closed before the Earth Fleet arrives. He then gives the player his PDA and tells him to go on without him.

At the end of the game, it is revealed that Swann has died from his wounds.