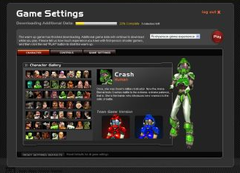 Crash, a female space marine, is one of three Doom related characters, alongside Doom and Phobos, who originally appears in id Software's Quake III Arena and reprises her role in Quake Live. The games describe her as such:

"She was once Doom's military instructor. Now the Arena Eternal tests Crash's mettle to the extreme - extreme patience, that is. She is the trainer who introduces new warriors to the skills of battle."
― Quake III Arena manual

In both Quake III Arena and Quake Live, Crash serves as a tutorial to the game. She is the first and one of the easiest to defeat in the long series of bot opponents the player must face in the game's single player mode. In Quake III, it is necessary to score five frags against her in order to move on. Her preferred weapon is the shotgun. Her scripting allows her to make randomized responses to chat messages sent by the player.