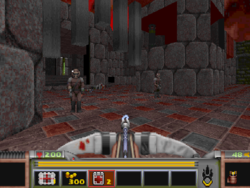 Using the crossbow with electric bolts. 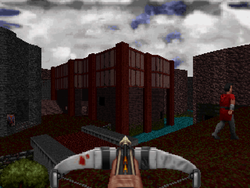 The poison crossbow.
For information about the weapon from Heretic, see Ethereal Crossbow.

The crossbow is a weapon in Strife. The crossbow uses two different types of bolts: electric bolts and poison bolts. Electric bolts are a basic ammunition that deal low damage against any target; firing them is noisy and will set off alarms and alert enemies. Poison bolts are useless against machines, but are fatal to human targets such as peasants and acolytes, who will be instantly killed in a stealthy manner.

The ammo capacity for electric bolts is 50, and 25 for poison bolts. Both are doubled (making the capacity 100 and 50, respectively) upon finding an ammo satchel. Picking up a crossbow gives 8 electric bolts.

This weapon can be obtained inside the Sanctuary or through accepting the quests from Rowan or Harris.

In the IWAD the crossbow is first encountered on these maps per skill level:

The IWAD contains the following numbers of crossbows per skill level: