Crossing Acheron is a single-level PWAD designed by John "Dr. Sleep" Anderson, part of his Inferno series. As part of their 10 Years of Doom feature, Doomworld named it one of the ten best WADs of 1994.

At least four versions of the map are known to exist:

The first two WADs replace E1M3; the other two replace MAP03. The level also appeared in Maximum Doom as ACHERON2.WAD, as MAP15 of R.WAD, as MAP15 of RALPHII.WAD, as E2M7 of RALPHNEW.WAD, and as MAP25 of WADPAK4.WAD. 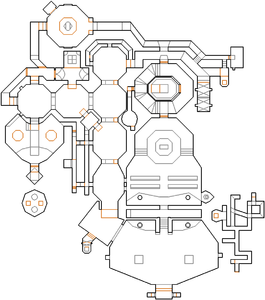 Map of Crossing Acheron v2.2
Letters in italics refer to marked spots on the map. Sector, thing, and linedef numbers in boldface are secrets which count toward the end-of-level tally.

The records for the original map at the Doom Speed Demo Archive are:

An alternate release of version 2.0, labeled 2.0a, occurred on December 5, 1994. The two WADs are identical apart from the ENDOOM lump.

Crossing Acheron is the sequel to Dante's Gate. Although released singly, both were originally conceived as part of a full episode replacement. E1M3 was chosen over E1M2 as the map slot because E1M3's stock music better fit the overall theme.

At the time, Dr. Sleep said that the original release of Dante's Gate was too easy, and he wanted Crossing Acheron to have a faster pace (in addition to his customary emphasis on texture placement and atmosphere). Subsequent revisions added new areas and monsters, increasing the difficulty further.

Acheron is a river in hell, according to Dante's story (and the Greek spiritual traditions preceding it). Dr. Sleep tried to create a river as an architectural feature in this map, but couldn't come up with one which looked sufficiently realistic.