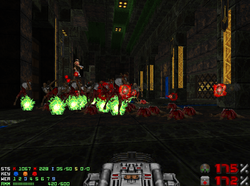 The player kills some revenants, after causing others to infight a cyberdemon in the Unhallowed map.

Crowd control refers to a method of gameplay in which the player finds him/herself in a difficult to escape scenario or enclosed room which consequently becomes heavily populated with monsters, to the point where the player needs to exercise his/her knowledge of the game mechanics to escape. A crowd control scenario or style of gameplay often exists either due to a liberating use of traps, or monsters that are awakened by the gunfire sound of an unsuspecting player. In many cases, a crowd control method of gameplay requires players to utilize special combat tactics such as straferunning and circle strafing in order to fend off the growing swarms of monsters before occupying all of his/her movable space. It also depends on the player knowing how to maximize the damage caused within a group of monsters so that they can be killed at a faster rate than the speed at which they surround the player. This includes causing infighting among different species of monsters, using the shotgun or super shotgun's multiple pellets to kill or damage many monsters at once, use the chaingun or plasma gun to pain-stun monsters, or efficiently use the rocket launcher's splash damage or BFG9000's spread to deal as much damage per shot as possible. The player is expected to kill monsters at an extremely high rate, whilst seeking opportunities to lead monsters away from him/her, lest he/she be backed into a corner by the overwhelming odds, and either be killed or endure significant amounts of damage.

Imps are often used in crowd control scenarios, as they can be troublesome from a distance, and even deadlier up close. Demons and Spectres are also often used because of their speed and large size. Cacodemons serve as a decent combination of both monsters, with less emphasis on speed and more on it being a damage sponge. Revenants are especially deadly in crowd control scenarios due to their speed and homing missiles which are extremely dangerous in close quarters. Crowd control scenarios that offer higher powered weapons usually use monsters such as baron of Hell, Mancubi, and Arachnotrons given their high damage absorption and the amount of space they occupy.