This article is about the artifact from Doom (2016). For the weapon from Doom Eternal, see Crucible (Doom Eternal). 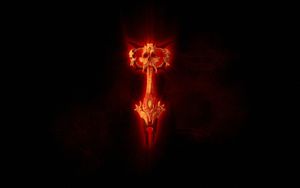 The Crucible appears in a vision caused by the Helix Stone. 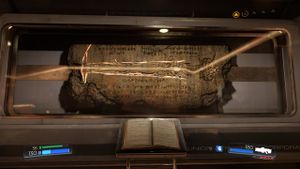 The Crucible, a central plot item in Doom (2016) and in Doom Eternal, is an artifact from Argent D'Nur which wields mysterious control over the Argent energy reserves of Hell, capable of shutting down—and apparently reactivating—the source of that energy known as the Well. Samuel Hayden sends the Doom Slayer back into Hell with the purpose of reclaiming the Crucible, stating that its recovery is the only means to seal the Hell portal which was opened at the Argent Energy Tower by Olivia Pierce. The Slayer actually sees the Crucible several times before finding it, in bizarre psychic visions which plague him during his journey between different areas. The first such vision is seen as he dons his armor.

The Crucible is found at the end of the Necropolis within the Hell guards' arena, where it is stored inside a retractable pillar. Defeating all three of the Hell guards allows the Slayer to at last reclaim it, after which he encounters the spirits of five of the Night Sentinels in a green, ghostly form. It appears as a compact skull-like ornament connected to a base by a central handle. The true form of the Crucible however is not directly revealed until the end of the game, when it is taken from the Doom Slayer by Dr. Hayden forcefully while he is being held captive by the tethering device. Stating that he is unable to kill the Slayer, Hayden still manages to activate the Crucible in a threatening display, revealing it to be a weapon in the form of a sword with an Argent energy blade, inscribed with blazing red runes.

While an important item in the story, the Doom Slayer never gets to wield the demonic Crucible actively as a weapon, only briefly using a sacrificial dagger concealed in the bottom of its hilt to destroy the captured souls of the Wraiths which power the Well. Hayden intends to use it to further his Argent energy research and further endanger mankind in the process.

If a stone tablet in Samuel Hayden's office is carefully examined, it can be found to display an etched picture of the Crucible in its true form. This is the only hint that is given of it before its appearance in the game's ending. The multiplayer map Argent Breach also contains a statue created by the culture of Argent D'Nur which depicts the full form of the weapon. Argenta engravings which can be found in areas such as Empyrian and Taras Nabad frequently depict the Crucible against the backdrop of a diagram which resembles the mystic tree of life as it appears in kabbalistic tradition. As statuary strongly associated with the Maykrs sometimes depicts the weapon, it may have some historical connection to them. 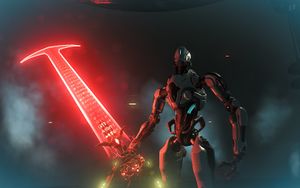 Samuel Hayden reveals the true form of the Crucible.

As stated previously, the Crucible serves as the main MacGuffin in the game and is seen primarily in visions, out of reach of the Slayer. The Slayer finally acquires the Crucible after facing off against the three Hell guards encountered at the end of the Necropolis. He retains it from that point into the end of the game, using it like a key to shut down the power source of the Hell portal in Argent D'Nur. After the defeat of the Spider Mastermind, Hayden forcibly brings the Slayer back to Mars and confiscates the Crucible from him. It is at this point where the true form of the artifact is revealed.

With Earth facing a global energy crisis due to the loss of the Mars facility, Hayden presented the Crucible to the Allied Nations' Global Council and explained that it could be used as a conductor to generate man-made Argent energy. Anticipating that the Slayer would come to retrieve the Crucible at some point, Hayden had it stored in the ARC Complex for safekeeping.

In Doom Eternal, the Slayer recovers the Crucible from the ARC Complex along with Hayden's damaged torso. After the Khan Maykr drains all the Sentinel energy from the Fortress of Doom, the Slayer uses the Crucible to restore power; the irony is not lost on Hayden, who points out that the very energy that the Slayer tried to eradicate could now be used to save Earth. Hayden then points out that as a Crucible is the only weapon capable of killing a Titan, the Slayer will have to retrieve his personal Crucible from Taras Nabad, where it was embedded in a Titan's body during a historic attack on that location.

The Doom Slayer's Crucible has a dramatically different hilt, with a Sentinel design and bearing the mark of the Slayer. The energy blade is nearly identical to that of the demonic Crucible, save for a small hole at the bottom near its attachment to the hilt.

Marauders can also be seen to carry a similar Argent-bladed battle axe, and Night Sentinel guards are equipped with Argent-tipped spears. The Betrayer keeps an Argent-powered warhammer in his stronghold, which he presents to the Slayer during The Ancient Gods, Part Two in gratitude for putting his son's soul to rest.

According to The Art of DOOM, the Crucible was referred to as a "talisman" during development.[1]