This article is about the weapon from Doom Eternal. For the artifact from Doom (2016), see Crucible. 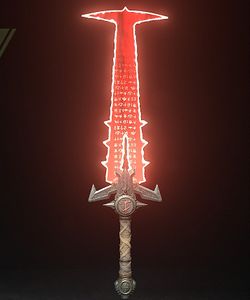 The Crucible, also called the Crucible blade, is a weapon in Doom Eternal, a legendary sword which was taken up by the Doom Slayer after his empowerment by the Seraphim during the attack on Taras Nabad by the forces of Hell. He retrieves it during the course of the game in order to oppose the Icon of Sin, as the Crucible is the only weapon known to be able to kill a Titan.

The Crucible is a power weapon which executes instant glory kills against any type of demon other than the marauder, even without the requirement that the demon be in a stagger state; marauders can be killed with the Crucible only when staggered. The Doom hunter requires two charges: one to destroy its sled and the other to kill it. Depending on the enemy attacked, the Slayer will swing the sword anywhere from one to three times, cleaving the enemy into multiple pieces and returning health as a reward. Any demon except the tyrant and marauder will be cut in two, while the marauder is cut in three and tyrant is cut in five parts. The Crucible is powered by charges which are found at fixed points on the map and can only hold three charges at a time.

It is said that immediately after his transfiguration, the Doom Slayer took the Crucible in hand and Wraithfire leapt forth from its hilt in the form of a blade. This was normally expected to only be possible for a Night Sentinel of royal blood, and thus the Slayer was recognized as a secondary sovereign by the Sentinels after this event, apparently ranking just under King Novik (to whom the Slayer still demonstrates fealty in the present).

The Slayer used the Crucible to attack and fell the Titan which had come to Taras Nabad. The Crucible was left stabbed into the Titan's heart, as the seemingly indestructible nature of the giant demons means that they will come back to life if the blade is removed. When the Khan Maykr threatens to resurrect the Icon of Sin, the Slayer returns to Taras Nabad to retrieve the Crucible. In order to avoid awakening the Titan, he breaks the blade from the hilt. This prevents the Titan from coming back to life, but requires the forging of a new blade from components left in the Slayer's vault before the Crucible can be used.

After the Icon of Sin's defeat, the Slayer likewise plunges his Crucible blade into the brain of the giant, before breaking it again and leaving him with only the hilt in hand, ostensibly to be re-forged once more in the future.

In The Ancient Gods, Part One, the Nameless One is depicted in the Codex with a sword very similar in appearance (if not actually identical) to the Crucible. In Part Two, the Nameless One uses this blade (along with a matching shield) to battle the Slayer.

The Crucible first appeared in the end of a modified version of the Mars Core segment of the gameplay reveal, as the Slayer brings out the blade before swinging it to the arch-vile before the screen turns black in a cinematic fashion. This encounter is not the case for the final version, as the entrance to the BFG-10000 is inaccessible and both the arch-vile and Crucible do not appear until Taras Nabad.