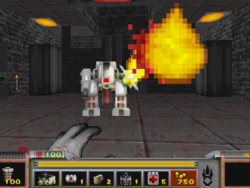 A crusader robot pelting the player with flames in MAP31: Training Facility

The crusader is an enemy from Strife. It is an Order-constructed bipedal robot, equipped with a triple barreled rocket launcher for ranged attacks and a flamethrower used at close range. The flamethrower is ineffective against the player if they wear an environmental suit. They are reasonably well armoured, with 400 hit points. When they die three explosions follow, dealing blast damage to all nearby characters, including the player. They also drop an energy pod.

The crusaders act as support to Order acolytes during battles, since despite their resiliency and firepower, they are still just robots.

The crusader was created by Rogue Entertainment artist and modeller Steven Maines. A reference three-dimensional model was created using 3DStudio Max and then animated, rotated, and quantized to Strife's palette in order to create the game's sprites. According to Maines, the crusader's character spec sheet called for a squat, compact enemy that imitated the 1987 American science fiction action film RoboCop's ED-209 to populate early levels of the game.[1]

In the IWAD the crusader is first encountered on these maps per skill level:

The IWAD contains the following numbers of crusaders per skill level: