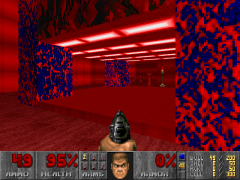 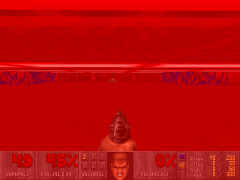 Crushing ceilings are a hazard that appears in Doom, Heretic, Hexen, and Strife. A crushing ceiling cycles between its starting height and eight units above its sector's floor. It damages any players or monsters that happen to be in the space between the two planes. In Doom, barrels explode when crushed, corpses become pools of blood, and weapons and ammunition dropped by monsters will disappear. Crushing ceilings also destroy projectiles, whether fired by the player or by monsters.

Crushing ceilings are set in motion by specific linedef types. Once started, they remain running for the remainder of the level, even if temporarily suspended with a "stop" linedef type. Most other actions in the sector will be locked out afterward (this may vary depending on the source port used for play). A stopped crusher can be restarted, but not changed, with any crusher "start" linedef.

A crusher can be either slow or fast. A slow crusher does more damage, simply by being applied longer. When a slow crusher is moving down and hits a player or monster, it slows down even more, by a factor of eight. This persists until it reaches the bottom of its stroke and starts upward again. Fast crushers do not slow down.

Crushing ceilings are listed as part of the "dangerous Doom environment" in the printed game booklets.

In Hexen, a crushing ceiling can inflict any amount of damage based on a parameter to the linedef action or script, still at a fixed rate of once every 4 tics. Unlike Doom, the crusher stops descending if there are objects in the way, allowing those trapped to escape or even to allow a player to slip under the ceiling while it crushes.