The Cultist Base is the third level of Doom Eternal. The Doom Slayer must hunt down the second of the three Hell priests, Deag Ranak.

The mecha zombie, mancubus, shield soldier, whiplash and cueball enemies are introduced in this level (along with the prowler via a Slayer Gate encounter), as well as the rocket launcher and super shotgun weapons.

"With the Celestial Locator now in your possession, you are able to pinpoint the locations of the remaining Hell Priests. Deag Ranak, leader of the UAC division responsible for Earth's invasion, has been located at the remote Cultist arctic base. Infiltrate the encampment and neutralize Ranak."
― Loading description

Infiltrate the Cultist Base
Obtain your Super shotgun

Pull the Crystal
Acquire a Sentinel Crystal.
Armored Rain
Ignite 4 demons in a single blast of the flame belch.
Master of Turrets
Destroy an Arachnotron's turret. 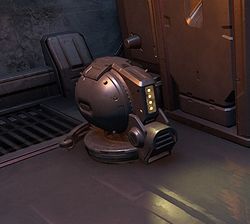 A cleaning robot turning toward the player.

This is the first level to feature cleaning robots, an environmental piece that returns in many subsequent levels.