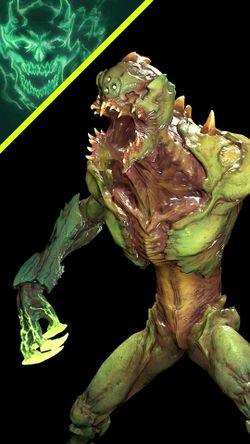 The cursed prowler as it appears in the Codex.

The cursed prowler is a monster introduced in The Ancient Gods, Part Two. It is a variant of the prowler, identifiable by its sickly green skin and bioluminescent claws.

If the player is struck by the cursed prowler's attacks, they will be afflicted with a curse that deals constant damage over time and prevents dashing; it will also be impossible to target the prowler with lock-on weapons. The only way to end the curse is to kill the prowler with a blood punch; if the player has no blood punch charges, one charge will be given automatically upon being cursed. The prowler's location will be indicated on the screen when cursed, but it will often try to get away from its target in order to ensure that the player is unable to kill it before succumbing to the curse.

The cursed prowler's claws are laced with a necrotic poison, a type of blood magic that few have the knowledge to conjure. One swipe curdles the victim's blood and drains their life; killing the caster is the only way to end the curse.