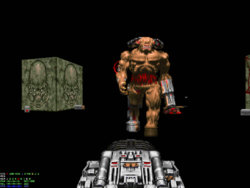 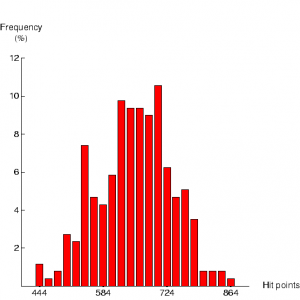 The cyberdemon in Doom 64 has undergone some changes. Aesthetically, it has darker colored skin, is much wider, and its rockets leave smoke trails. Gameplay-wise, the cyberdemon moves much slower, with its movement speed reduced from 187 u/s down to 120 u/s, and its rockets are faster, with their movement speed being buffed from 700 u/s up to 900 u/s. Additionally, its rockets now have a firing offset that has them emerge from the launcher itself instead of from the middle of the monster. Due to the cyberdemon's massive height, this results in the rockets being fired in a downward angle towards the player when on levelled height, making splash damage a greater threat as the rockets can hit the ground and explode near the player, meaning the 64 cyberdemon does not need the aid of walls for its splash damage to be a factor. While the Doom 64 cyberdemon has a similar death sequence animation compared to its PC counterpart, consisting of a full-body explosion, it is more elaborate in Doom 64, involving its form stricken with several separate explosions before the body essentially evaporates in a haze of fiery blood, replete with a shot of its skeletal frame vanishing into the clouds. 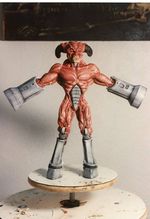